One of my most popular posts of last year was M-Learning’s dirty little secrets.

By “popular” I mean quantitatively: it attracted a relatively large number of hits and comments. Qualitatively, however, the situation was somewhat different: while many of the comments were concordant, others were not. For the record, I don’t believe those discordant comments were wrong – they just represented different points of view in different contexts.

Nonetheless, while I stand by what I wrote back then, there was always something niggling at the back of my mind. I felt that I had missed something. Those discordant comments prompted me to think about it deeper, and I’m glad they did because now I feel I can improve my position.

Given the increasingly mobile workforce and the emergence of BYOD, increasing pressure is being placed on the organisation to distribute its content to multiple devices. In corporate e-learning, the most obvious example of such content is the online modules that the company distributes via its Learning Management System.

In M-Learning’s dirty little secrets I advocated the creation of “one course to rule them all”. I argued that if you must push out training, forget about smartphones. No one wants to use them for that, so they are an unnecessary complication.

Instead, concentrate your efforts on the one course that will fit onto desktops and laptops and tablets – ie what your target audience will use to consume it. If you base it on HTML so it will run across operating systems, you can make the course device agnostic.

Responsive web design may render my argument moot – but only when rapid authoring tools adopt the protocol, enabling Average Joe to implement it.

Having said that, in M-Learning’s dirty little secrets I also advocated pull learning.

Instead of pushing out yet another course, I’m more inclined to host content on a mobile-friendly platform like an intranet or a wiki that the learner can access, browse and search via their device of choice – including a smartphone.

This approach empowers the learner to pull the content at their discretion, wherever they are, at the time of need. It replaces the notion of training “in case” it will be required with performance support “when” it is required.

For many, this is the essence of m-learning: on demand, in the moment, in context, just in time, in the workflow.

And yet, while this deceptively simple mindset represents a tectonic shift in corporate pedagogy, it does not on its own fulfil the potential of m-learning. For that, we need a third mindset… 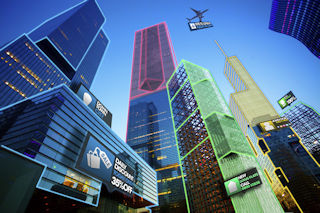 Experiential m-learning leverages the environment in which the learner exists.

This approach need not be hi-tech. For example, a tourist following the walking tour in a Lonely Planet is undertaking experiential m-learning. The book points out the specifics of the environment, and the tourist subsequently experiences them.

Of course, electronic technology facilitates experiential m-learning like never before. Handheld devices combined with the Internet, geolocation, and the likes of augmented reality make the learning experience engaging, timely and real.

It’s also important to note that this mindset applies to both push and pull learning. For example, an LMS-based architecture course may step the learner along a particular route through the city. Alternatively, an interactive map may empower the learner to select the points of interest at their discretion and convenience.

Which leads me to one of the commenters who took umbrage at M-Learning’s dirty little secrets. This fellow was developing a smartphone app for his students enrolled in a Diploma of Community Services. While I suspect his polemic stemmed from a misinterpretation of my argument (which no doubt related to my inability to articulate it sufficiently), he did indeed cause me to ask myself:

Why can’t an app push training on a smartphone?

And the answer, of course, is it can. But then I would add:

Why would you want to?

Given the speed and cost effectiveness of producing online courses in-house these days, combined with the availability of content repositories in most organisations, I would be inclined to save the time and expense of building an app – unless it exploited the mobility of the device.

So part of my lengthy response to this fellow was:

…I would suggest that the app enables the student to interact with the content *in the field*. Perhaps it encourages them to walk around the Cross (to be Sydney-centric, but you know what I mean) and prompts the student to describe their surroundings. If the app then simulates an interaction with a homeless person or with someone who is drug-affected, then it’s done in the context of the work and thus becomes infinitely more meaningful. And if the student could select the scenarios at their discretion rather than have to wade through them in a pre-defined linear manner, then that hands over to them some of the control that you want them to have.

In other words, I would bother with an app only if it offered something that “regular” push or pull content doesn’t. And that something is an authentic experience.

It is this mindset which urges us to realise the full potential of m-learning.

4 thoughts on “The 3 mindsets of m-learning”