A lifetime ago I graduated as an environmental biologist.

I was one of those kids who did well in school, but had no idea what his vocation was. As a pimply teenager with minimal life experience, how was I to know even half the jobs that existed?

After much dilly dallying, I eventually drew upon my nerdy interest in science and my idealistic zeal for conservation and applied for a BSc. And while I eventually left the science industry, I consider myself extremely fortunate to have studied the discipline because it has been the backbone of my career.

Science taught me to think about the world in a logical, systematic manner. It’s a way of thinking that is founded on statistics, and I maintain it should inform the activities we undertake in other sectors of society such as Learning & Development.

The lectures I attended and the exams I crammed for faded into a distant memory, until the emergence of learning analytics rekindled the fire.

Successive realisations have rapidly dawned on me that I love maths and stats, I’ve floated away from them over time, the world is finally waking up to the importance of scientific method, and it is high time I refocused my attention onto it.

So it is in this context that I have started to review the principles of statistics and its contemporary manifestation, analytics. My exploration has been accompanied by several niggling queries: what’s the difference between statistics and analytics? Is the latter just a fancy name for the former? If not, how not?

Overlaying the post-modern notion of data science, what are the differences among the three? Is a data scientist, as Sean Owen jokingly attests, a statistician who lives in San Francisco?

My journey of re-discovery started with the DIKW Pyramid. This beguilingly simple triangle models successive orders of epistemology, which is quite a complex concept. Here’s my take on it… 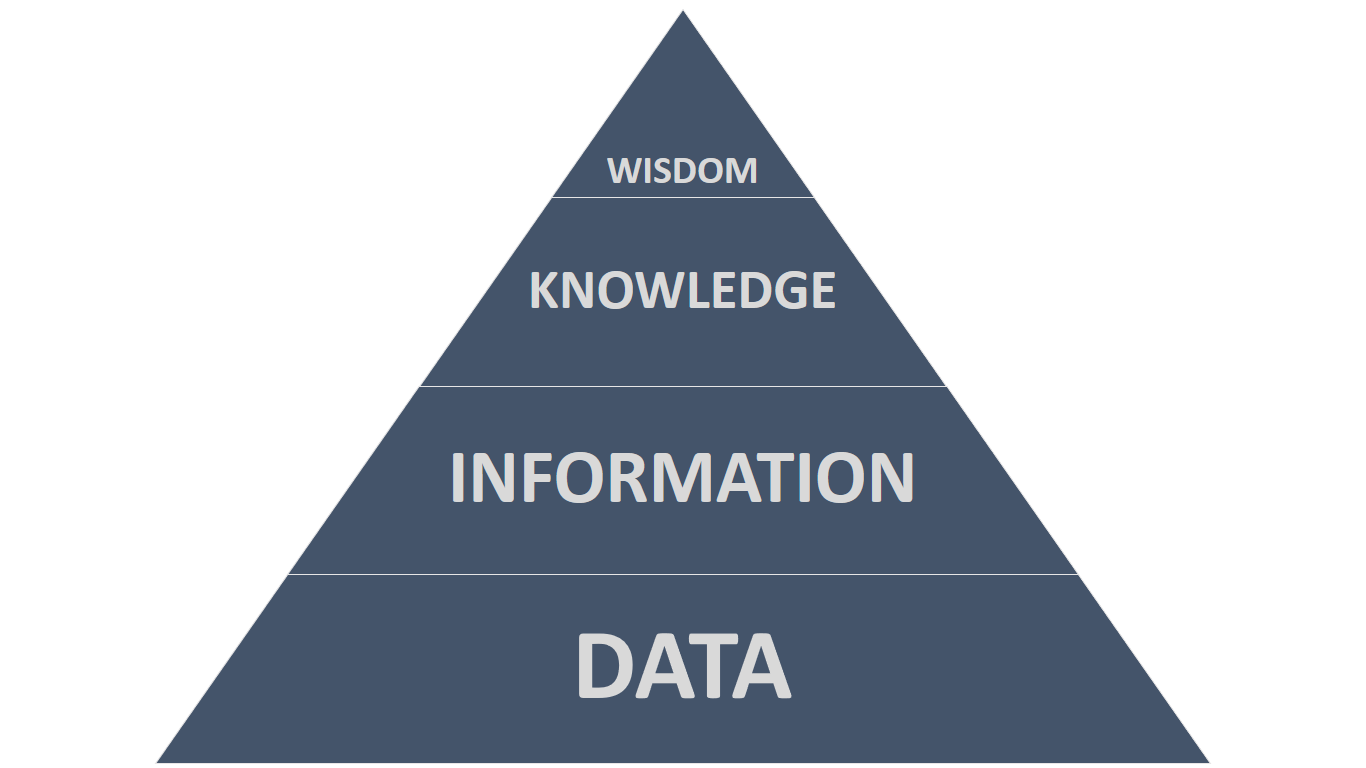 At the base of the pyramid, Data is a set of values of qualitative or quantitative variables. In other words, it is the collection of facts or numbers at your disposal that somehow represent your subject of study. For example, your data may be the weights of 10,000 people. While this data may be important, if you were to flick through the reams of numbers you wouldn’t glean much from them.

The next step up in the pyramid is Information. This refers to data that has been processed to make it intelligible. For example, if you were to calculate the average of those ten thousand weights, you’d have a comprehensible number that is inherently meaningful. Now you can do something useful with it.

The next step up in the pyramid is Knowledge. To avoid getting lost in a philosophical labyrinth, I’ll just say that knowledge represents understanding. For example, if you were to compare the average weight against a medical standard, you might determine these people are overweight.

The highest step in the pyramid is Wisdom. I’ll offer an example of wisdom later in my deliberation, but suffice it to say here that wisdom represents higher order thinking that synthesises various knowledge to generate insight. For example, the wise man or woman will not only know these people are overweight, but also recognise they are at risk of disease.

Some folks describe wisdom as future focused, and I like that because I see it being used to inform decisions.

My shorthand definition of statistics is the analysis of numerical data.

In practice, this is done to describe a population or to compare populations – that is to say, infer significant differences between them.

Then if we were to correlate all the weights against their respective household incomes, we might demonstrate they are inversely proportional to one another. 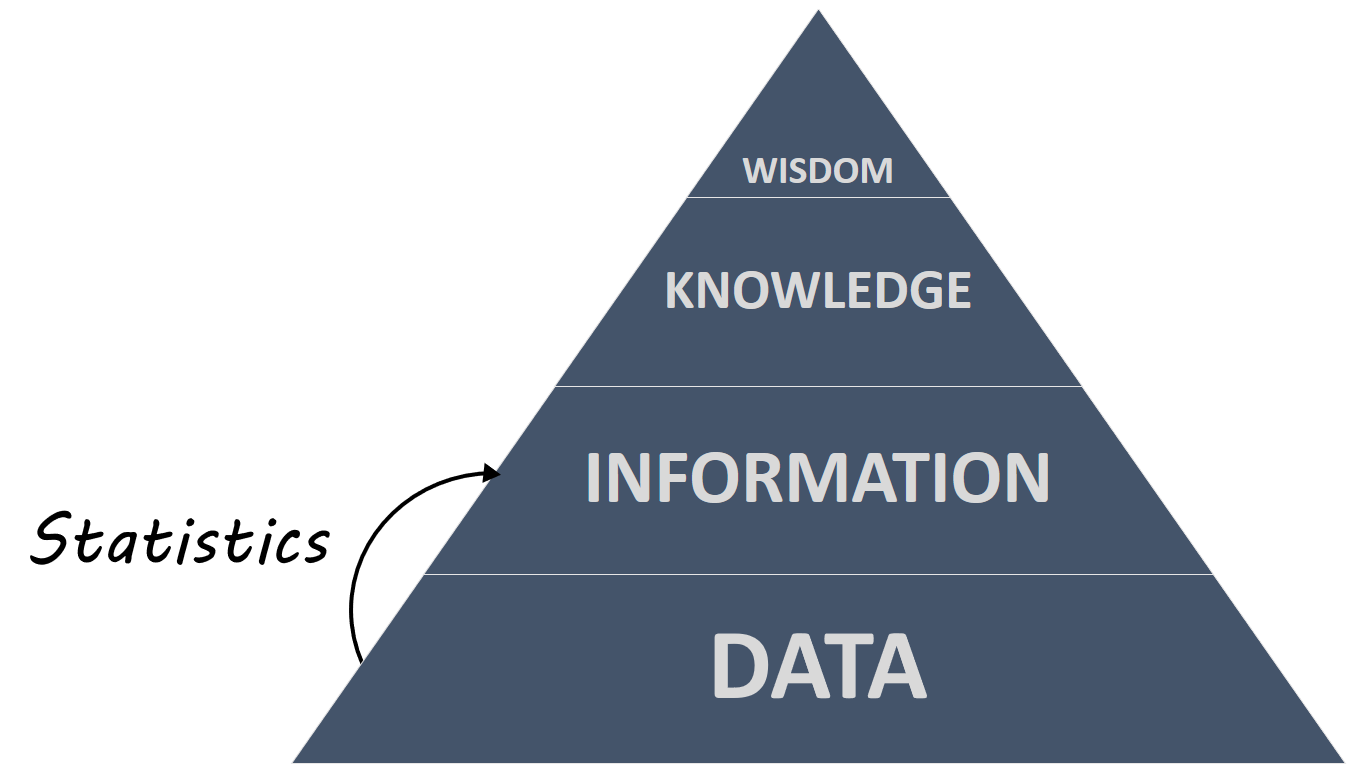 Thus, our statistical tests have used mathematics to convert our data into information. We have climbed a step up the DIKW Pyramid.

My shorthand definition of analytics is the analysis of data to identify meaningful patterns.

So while analytics is often conflated with statistics, it is indeed a broader expression – not only in terms of the nature of the data that may be analysed, but also in terms of what is done with the results.

For example, if we were to analyse the results of our weight-related statistical tests, we might recognise an obesity problem in poor neighbourhoods. 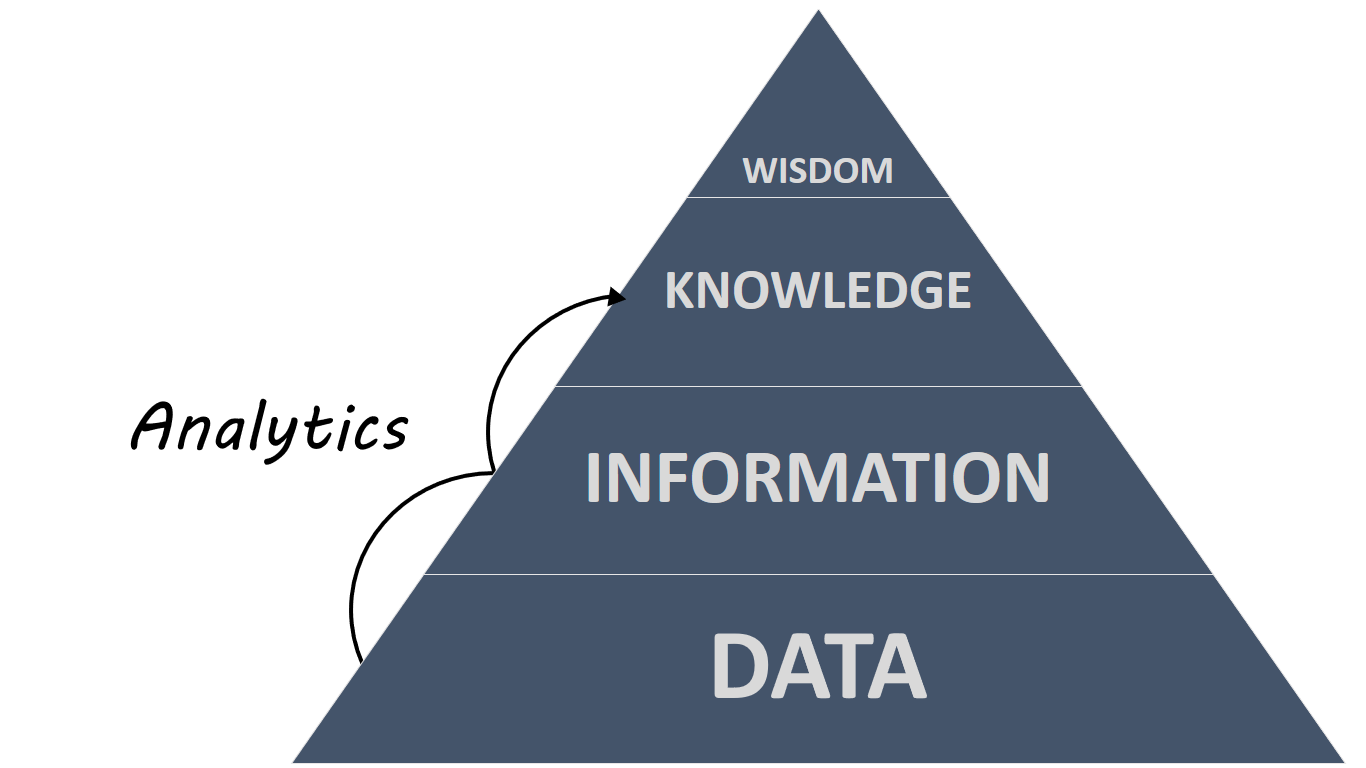 Thus, our application of analytics has used statistics to convert our data into information, which we have then translated into knowledge. We have climbed another step higher in the DIKW Pyramid.

My shorthand definition of data science is the combination of statistics, computer programming, and domain expertise to generate insight. Or so I’m led to believe.

Given the powerful statistical software packages currently available, I don’t see why anyone would need to resort to hand coding in R or Python. At this early stage of my re-discovery, I can only assume the software isn’t sophisticated enough to compute the specific processes that people need.

Nonetheless, if we return to our obesity problem, we can combine our new-found knowledge with existing knowledge to inform strategic decisions. For example, given we know a healthy diet and regular exercise promote weight loss, we might seek to improve the health of our fellow citizens in poor neighbourhoods (and thereby lessen the burden on public healthcare) by building sports facilities there, or by subsidising salad lunches and fruit in school canteens. 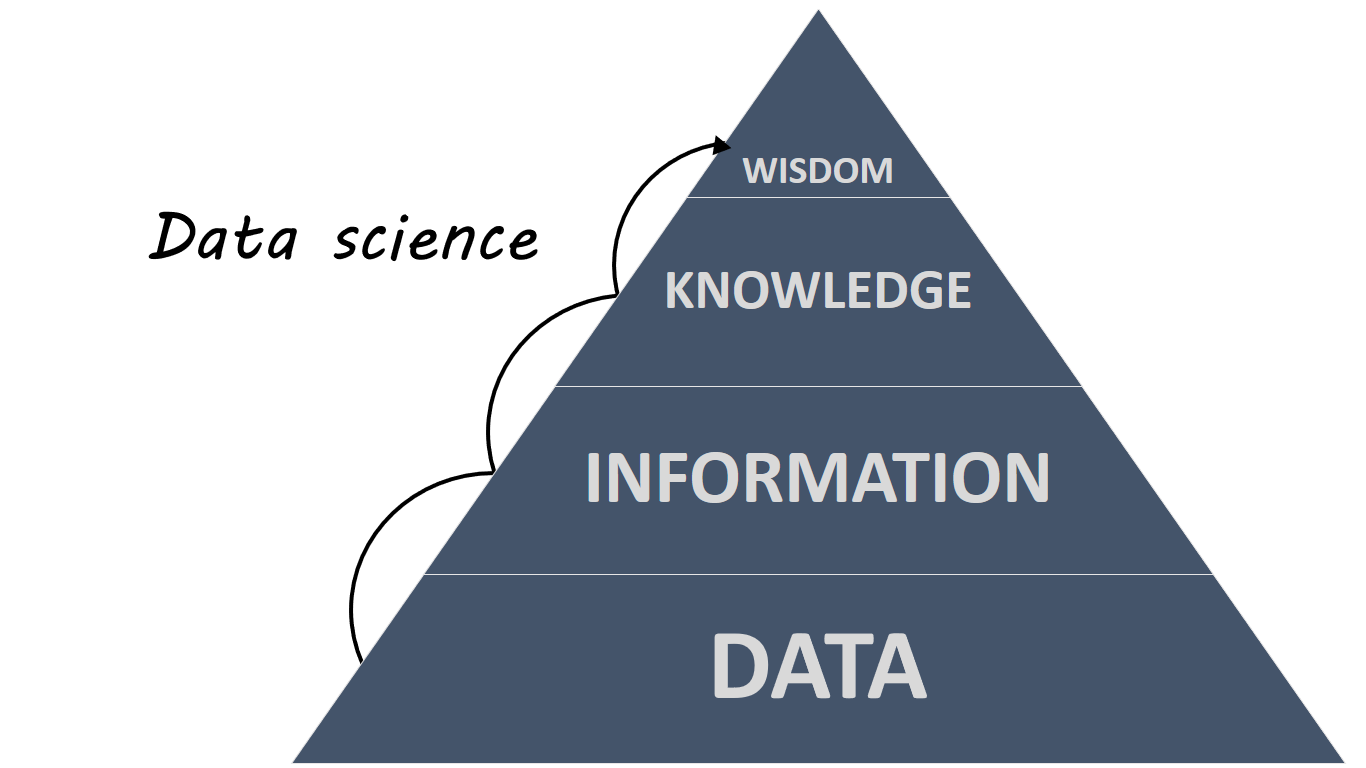 Thus, not only has our application of data science used statistics and analytics to convert data into information and then into knowledge, it has also converted that knowledge into actionable intelligence.

In other words, data science has converted our data into wisdom. We have reached the top of the DIKW Pyramid.

Hot on the heels of my 5 benefits of open badges for corporates, I now present my 7 big opportunities that MOOCs offer corporates.

Regular readers of my blog will know that I’m quite the MOOC fan. While I realise massive open online courses are not a panacea, I believe they have much to offer learners and learning professionals alike.

More specifically, I recognise the following opportunities to leverage them in the workplace. If you can think of any others, please let me know…

Quality content, for free, from some of the world’s most respected educational institutions? That’s a no-brainer.

While Coursera and others offer MOOCs covering business and management topics that are relevant across the enterprise, it’s important to realise that other topics (such as statistics, law and IT) may also be relevant to particular teams. Having said that, I believe there is much more scope for MOOC providers to cover corporate-relevant topics.

I envisage L&D professionals playing important roles in both curating and supporting MOOCs for their colleagues. In terms of the former, it’s important that the right MOOC be connected to the right employee so that it’s relevant to their performance on the job. This will involve an analysis of the curriculum pre-study, and an evaluation of the learning experience post-study.

In terms of supporting the moocers in the organisation, I envisage L&D pro’s undertaking activities such as facilitating communities of practice, setting up buddy programs, and organising external meetups.

Participating in a MOOC forms connections with people outside of your organisation. Whether it be via the online discussion forum, on one of the associated social media groups, or at a local meetup, suddenly you are introduced to a world of people who are passionate and knowledgeable about the topic.

And it’s not just people outside of the organisation you will connect to. You may also connect with fellow participants inside the organisation, whom you otherwise might never have met.

A MOOC can therefore facilitate the kind of cross-functional collaboration and diversity of thinking that many corporates talk about, but few ever do anything about.

Depending on the licensing policy of the content owner, a MOOC (or parts thereof) may be incorporated into an in-house offering.

Content sourced from a respected university can make the offering more engaging and lend it an air of credibility.

While corporates are increasingly realising that classroom delivery is not necessarily the most effective pedagogy for employee development, neither is delivering the training in exactly the same way via a webinar or converting the PowerPoint slides into an online module.

Instead, corporates should consider making their offerings “MOOC like” by creating an online space in which the content can be consumed and discussed by the employees (with SME support) over the course of several weeks.

This approach reduces the burden of managing classroom sessions (timetables, room bookings, flights, accommodation), and frees up face-to-face time for value added activities such as such as storytelling, Q&A and role plays.

I also suggest mimicking the flexibility of a MOOC, whereby signing up to the course, participating in it and even completing it is optional. However, only those who pass the assessment will have their completion status recorded in the LMS.

Just like a university, a corporate has expertise in a particular domain that it can share with the public. Perhaps after experimenting with internal “MOOC like” courses, the organisation can deliver a bona fide external MOOC either on their own server or via an established platform like Coursera.

Notwithstanding the fact that managing a MOOC is a lot of work, I would argue the investment is worth it. Think about it: you can access tens of thousands of customers and prospective customers who are becoming increasingly immune to traditional advertising. By educating them, you build up your goodwill and engender a sense of trust in your brand.

Then there’s CSR to consider. Does the company have an ethical responsibility to help the community through MOOCs? Not to mention the kudos that goes with it.

So while the financial viability of MOOCs has come under heavy fire in the blogosphere, the ROI might be more complicated than the profit-and-loss statement suggests.

If running a MOOC is a bridge too far for the organisation, there are other opportunities to become involved.

For example, the University of Virginia’s Foundations of Business Strategy MOOC invites real companies to supply real business problems for the (tens of thousands) of students to solve collaboratively.

As Foldit can attest, problem solving through crowdsourcing really works – and sometimes the results are spectacular.

This wades into the murky waters of privacy and ethics, but theoretically at least, a company could purchase access to a particular MOOC’s analytics.

Why would it want to do that? Perhaps to:

And if the organisation were to run its own MOOC, it wouldn’t need to pay anyone for the data.