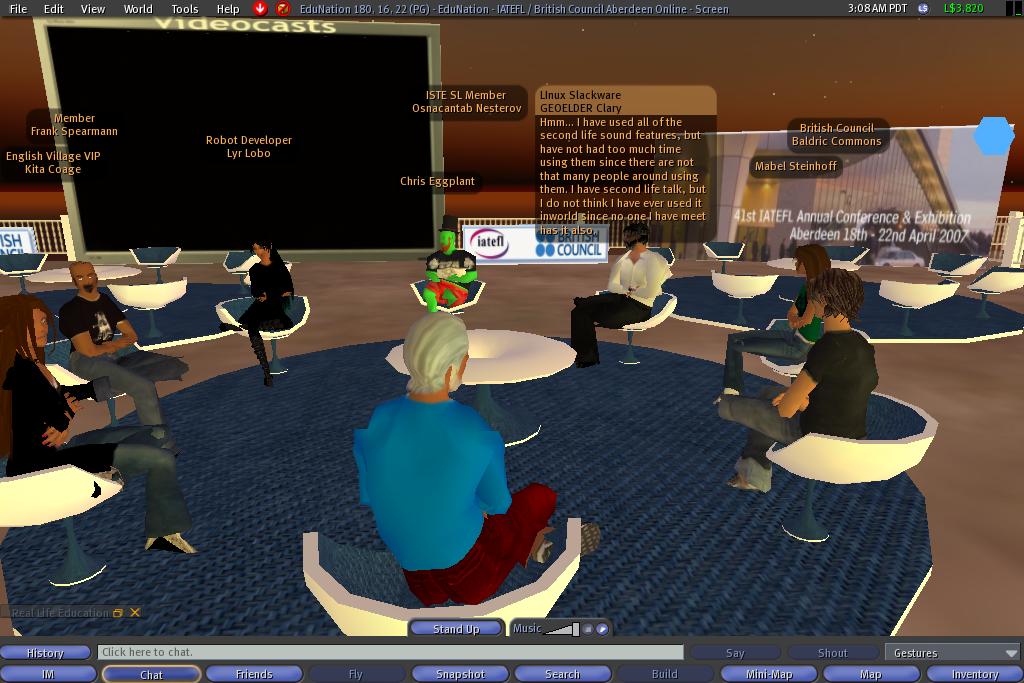 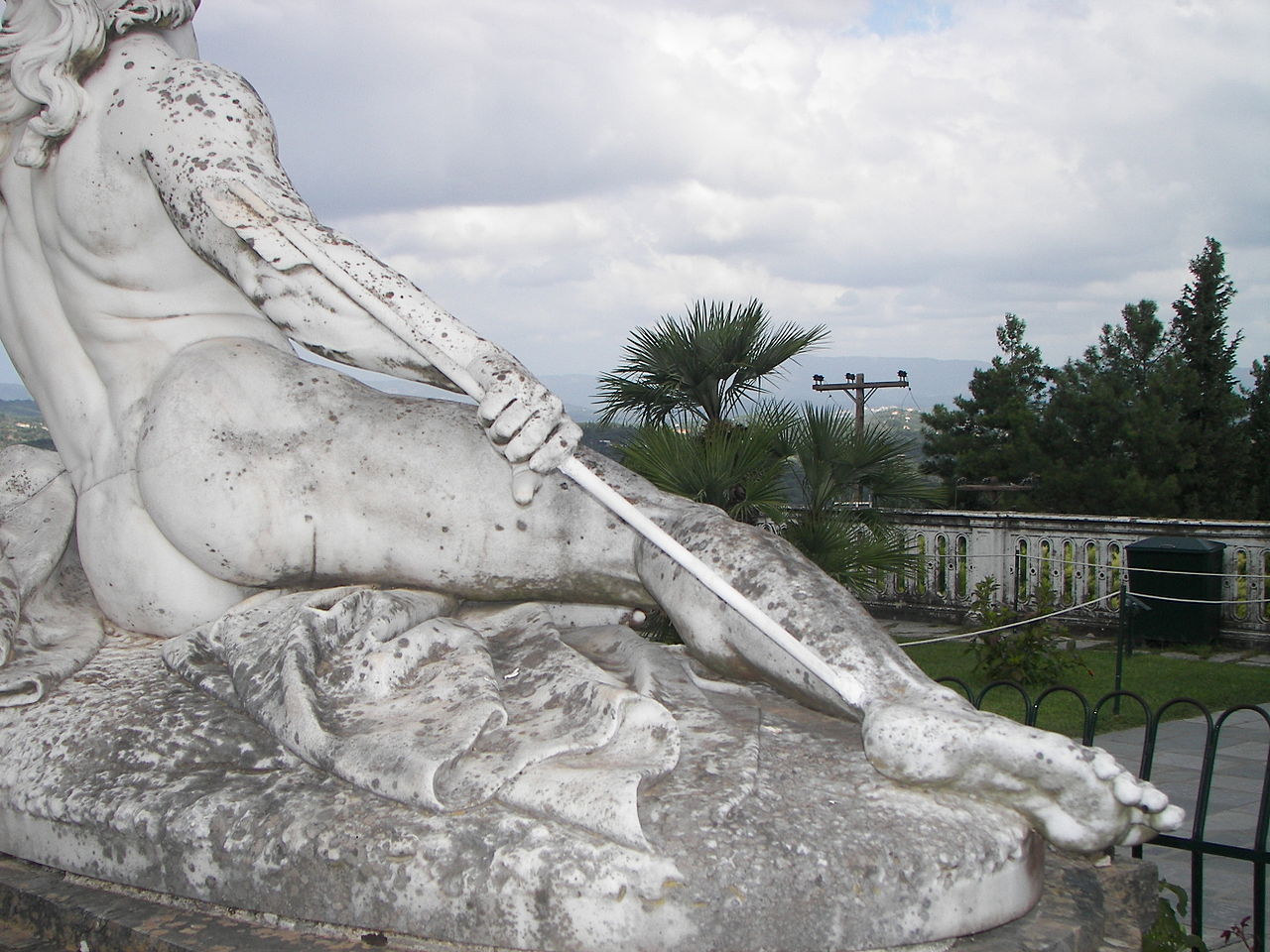 Over the weekend, AMP added a virtual assistant to its website. Her name is Sam and she’s a CyberTwin.

In a nutshell, a CyberTwin is an avatar that’s powered by AI to chat to real humans. In AMP’s case, Sam has been designed to answer customers’ questions about bank accounts and superannuation.

Can we apply CyberTwins to e-learning?

The short answer is “yes”.

CyberTeachers are endlessly patient, and have endless depth of knowledge. They can be trained to offer structured support to learn how to use a new piece of technology, bring life to learning content, and chat to thousands of people simultaneously for hours at a time. Our multi-lingual robots help visitors practice their English skills.

And yes, CyberTwins can be deployed into Second Life.

Yesterday, I attended a seminar at my workplace about emerging technologies and virtual worlds, which was presented by guest speakers Westley Field, the Director of Online Learning at MLC School and the Managing Director of Skoolaborate, Second Life “architect” Mike Mikula, and education consultant Lindy McKeown who joined us remotely via webcam and also via her avatar in Second Life.

Westley kicked off by providing us with an overview of emerging technologies, including QR codes and holograms.

The latter reminded me of the Princess Leia hologram in the original Star Wars… “Help me Obi-Wan Kenobi, you’re my only hope”.

The truth is, holograms are not restricted to the realm of science fiction. Sooner rather than later, we can have meetings with a mix of real people and holograms in the room. Don’t believe me? Check out this eye-opening video.

Next, Westley moved on to virtual worlds, which the Horizon Report identified in 2007 as likely to achieve widespread adoption in the higher education sector within 2 to 3 years. In fact, the education sector is really leading the charge in this space, with Westley’s Skoolaborate front and centre.

Skoolaborate is a growing collaborative of high schools that use Second Life to teach students around the world. It’s an initiative of MLC School in Sydney, which is somewhat famous in Australian e-learning circles for their use of innovative technologies in the K-12 sector.

Westley gave us a real-time tour of Skoolaborate’s islands in Second Life, with commentary from Mike. The islands have virtual lecture theatres where the teachers can show video clips and PowerPoint presentations to large audiences, plus breakout areas for small-group discussions and more open areas for informal ways of learning.

They have also built a virtual shopping centre not only to support the social/fun aspect of the virtual world, but also to explore principles of commerce, economics, marketing, design etc.

The Skoolaborate collaborative is really taking off. Currently 11 schools are participating, from Australia, New Zealand, Japan, Chile and USA, with interest from Singapore. The inaugural Skoolaborate Congress is being held in Sydney next week.

Next, Westley, Mike and Lindy led us to IBM’s virtual Business Center in Second Life, which the company uses to bring together staff, customers and partners to meet, learn, collaborate and conduct business. IBM staff members are even at hand in real time to answer customers’ questions.

They also took us to the Cisco Systems island, which the company uses to host classes, meetings and other events.

Plenty of companies have dipped their toes into Second Life with mixed success. I think Skoolaborate, IBM and Cisco are showing us how to do it right.

The corporate sector is exploring a whole new world.

Which world? The virtual world.

What is a virtual world?

A virtual world is a computer-generated environment that more-or-less replicates the real world.

Arguably the best known virtual world today is Second Life. Anyone can download the Second Life Viewer from the Internet and set up a basic account for free.

Each account owner creates a character (or “avatar”) which appears in the virtual world in – typically – human form. When the user logs into Second Life, they can use their mouse and keyboard to manipulate their avatar to walk, run, jump, dance, fly and teleport to other locations. Avatars can also socialise with other avatars via text chat, and more recently, real voice.

Second Life also has its own economy. Its currency is the Linden Dollar (L$) which avatars can use to buy virtual goods and even virtual property. Linden Dollars are bought with real money and can be exchanged back again. As of 7 July 2008, L$265 = US$1. 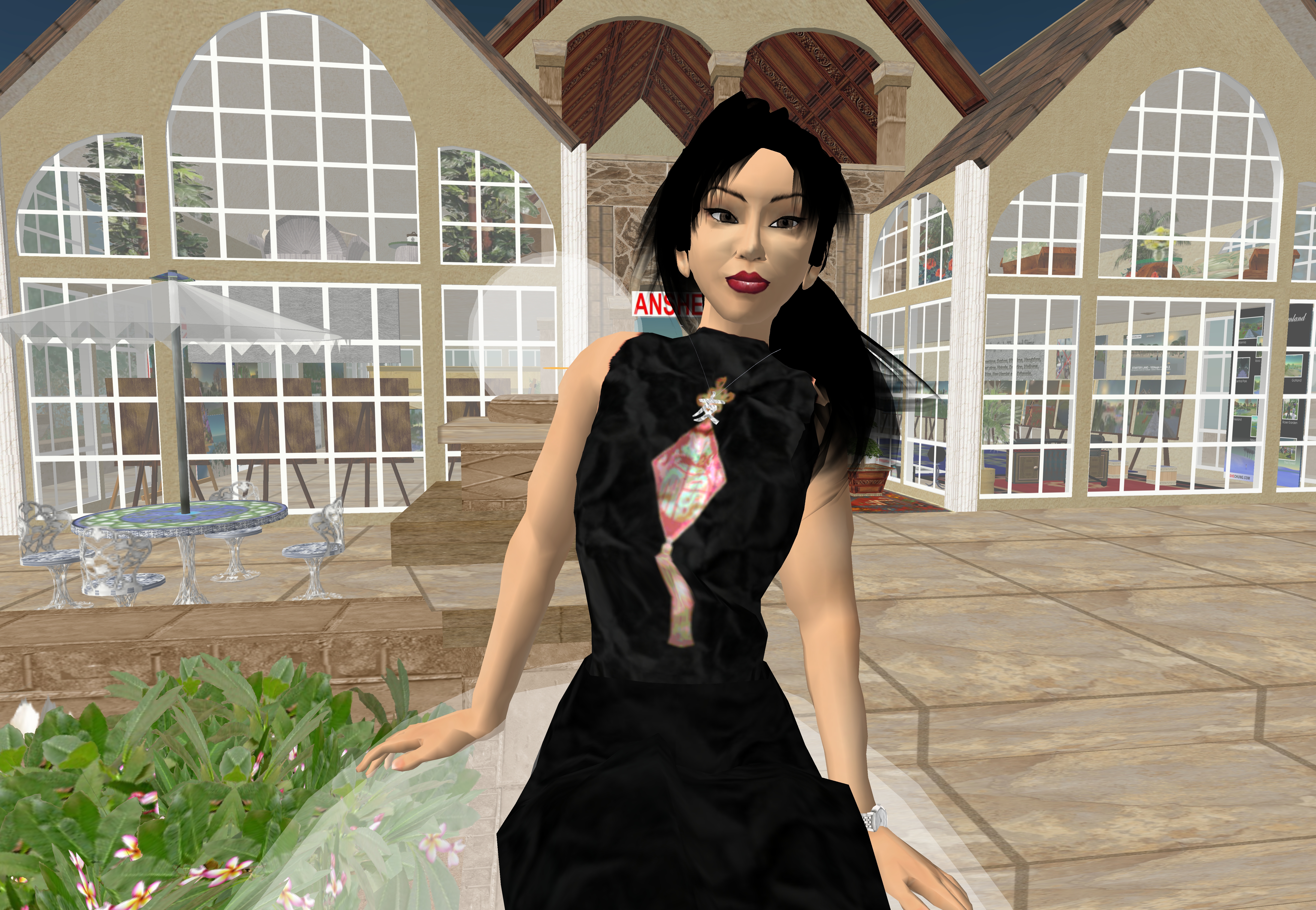 At first, I found all this is kind of hilarious, but of course Second Life was originally pitched to the entertainment market. In other words, people entered Second Life for fun.

Notwithstanding its intent, smart cookies soon cottoned on to the fact that real money can be made in this virtual economy. People like you and me are creating all manner of virtual goods – clothes, tattoos, furniture, you name it – to trade in the virtual world. In 2006, Ailin Graef became a real-world millionaire by dealing in virtual property via her avatar, Anshe Chung.

And business isn’t restricted to entrepreneurial individuals. In fact, the companies dipping their toes into Second Life read like a Who’s Who of the business world: Adidas, Armani, Coca Cola, Dell, Kraft, L’Oreal, Peugeot… the list goes on.

Financial services in the virtual world

So who else has entered Second Life? The list includes BNP Paribas, BCV, Deutsche Bank, Saxo, Visa, and from Australia, Westpac.

But it’s not all beer and skittles. Recently, Ginko Financial declared insolvency with debts of L$200 million – equating to approximately US$750,000 of real investors’ money. Since then, complaints about virtual financial services providers prompted the operators of Second Life to institute a new policy:

As of January 22, 2008, it will be prohibited to offer interest or any direct return on an investment (whether in L$ or other currency) from any object, such as an ATM, located in Second Life, without proof of an applicable government registration statement or financial institution charter. 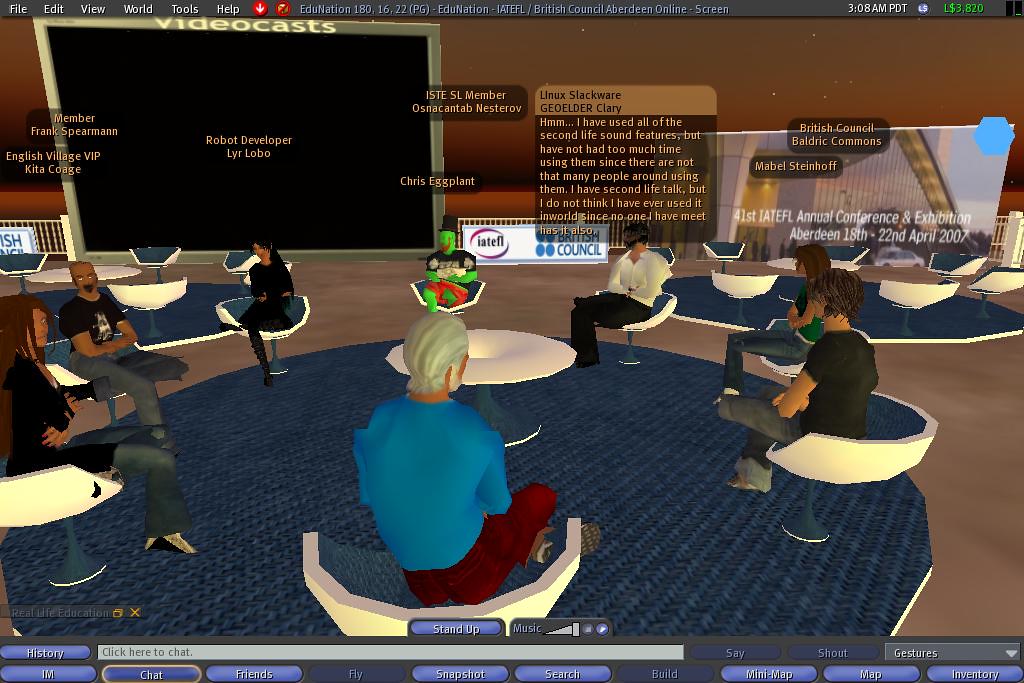 So what does Second Life offer legally incorporated, government-regulated financial services organisations in terms of e-learning?

Consider the following possibilities for customers:

Consider the following possibilities for employees:

While the potential of virtual worlds is tantalising, very real road blocks exist.

For example, the need to download a plugin and register individual accounts is never a good start.

Another problem is bandwidth. Second Life’s media is so rich, users chew through the data – making it technically challenging and potentially expensive.

There are plenty more criticisms of Second Life.

While the real-world companies that have entered Second Life thus far have had mixed success, I’d suggest the virtual world remains under-explored by the corporate sector, particularly for e-learning.