There’s a maxim among pub pool players that the consumption of beer will improve your game, until you reach a tipping point whereby the alcohol flooding your bloodstream diminishes your mastery of the cue.

Funnily enough, it’s not just an urban myth. While The Watsonia Bugle cheekily reports an empirically generated (but alas, fictional) bell curve, the effect of ethanol-induced relaxation and confidence on the players of time-rich sports has some actual science underpinning it. 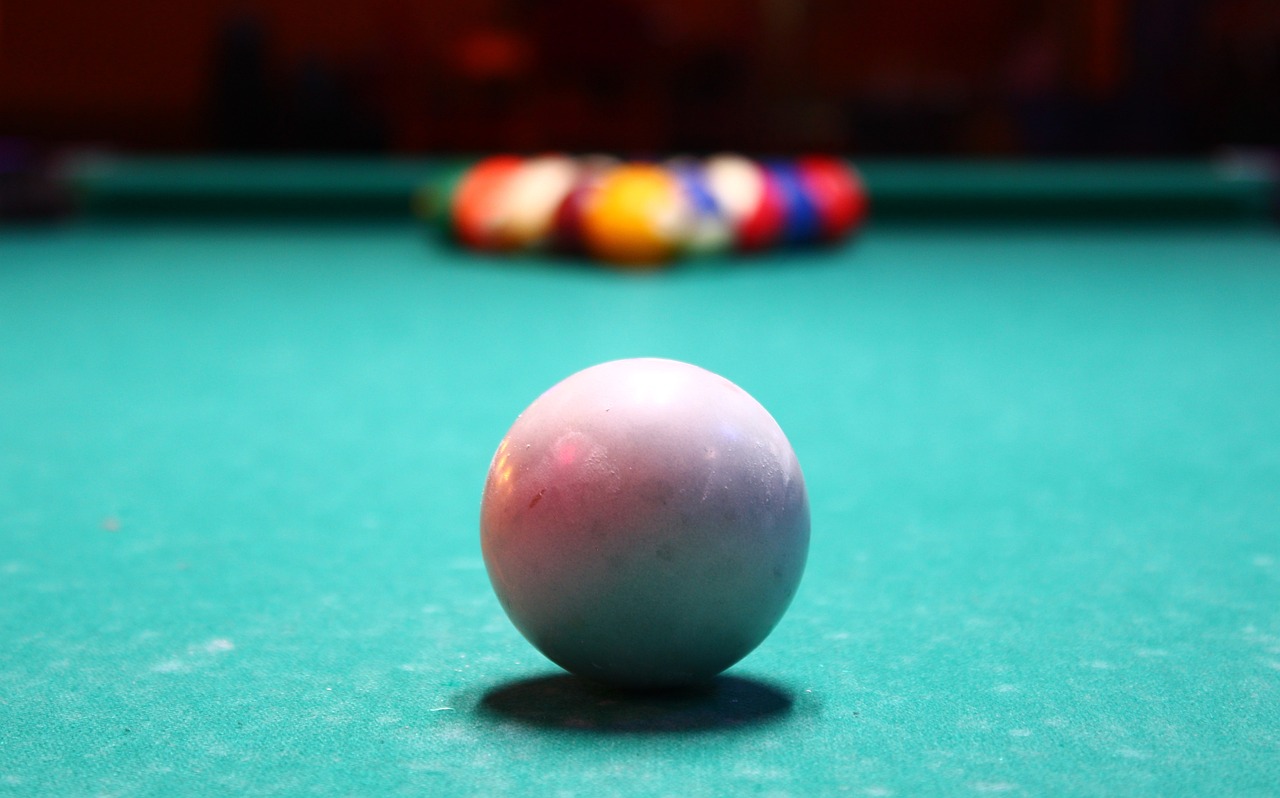 I recognise a similar pattern in the field of corporate innovation. Not with lager (lol!) but with another variable: responsibility.

In a nutshell, I feel that anyone who’s expected to innovate needs to own a portfolio in which to do it. Armed with both the opportunity and the authority to make design decisions inside a ringfence, new ideas can be tried and tested quickly and efficiently without the myriad barriers that arise when you don’t have that power.

However, just like a pool player who’s overimbibed, someone who has too much responsibility thrust upon them will inevitably feel their pioneering spirit fade away. Preoccupied with the busyness of tasks and the pressure of deliverables, the would-be innovator has neither the appetite nor the headspace for trying anything new. His or her focus is firmly on survival.

The implication for business is clear. If you want to shift innovation from aspiration to action, give your people enough responsibility to get their hands dirty and achieve something real, but not so much that they lose sight of the end game.

The apex of innovation lies in the balance. 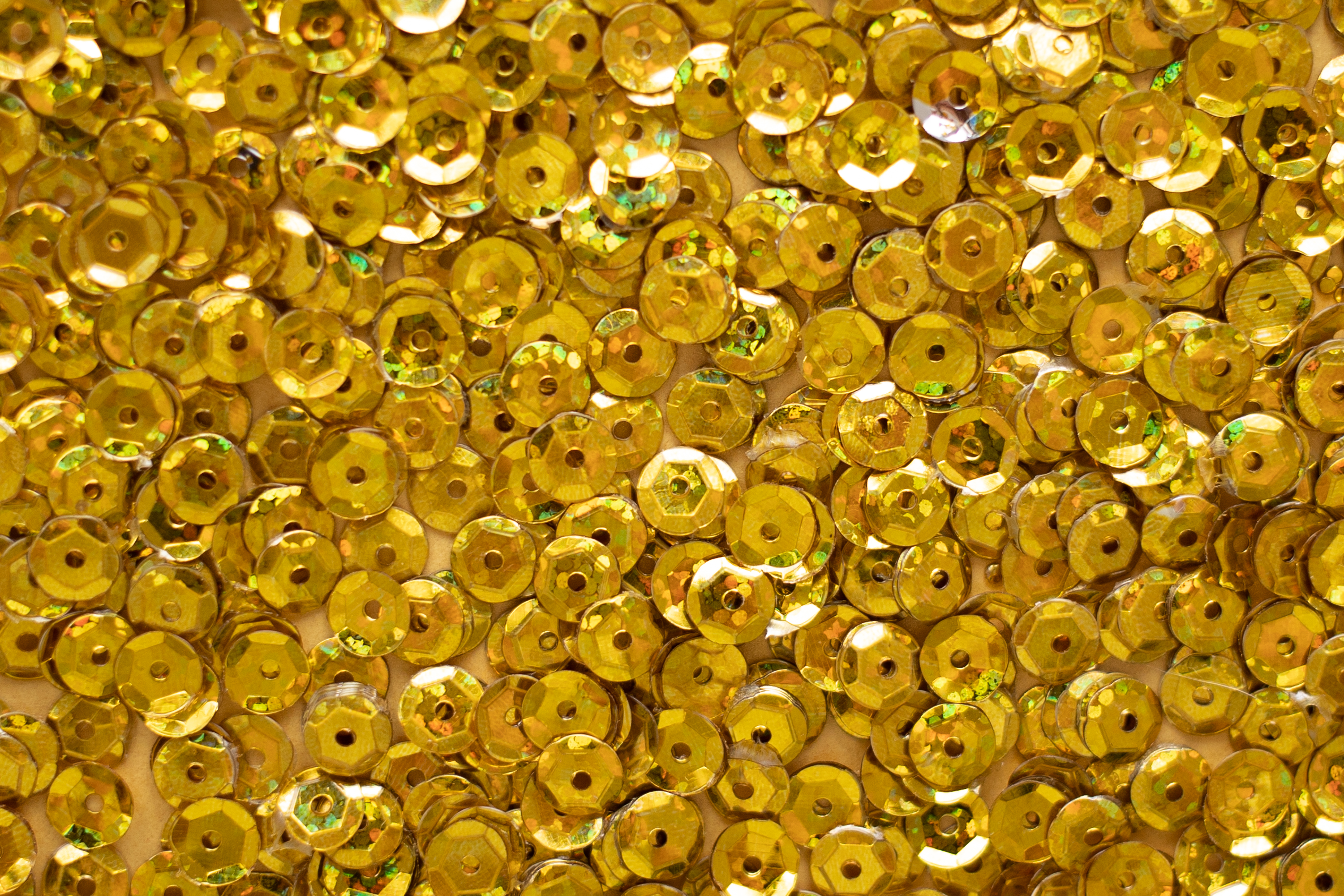 There was an aspect I omitted from my previous post, Space invaders, in which I covered the spacing effect as a means of maximising long-term retention.

Zsolt Olah picked it: interleaving and – ironically! – I judged it a bridge too far to include in the same post and so decided to split it out across a second one.

Before defining interleaving, I feel it’s helpful to review the opposite: blocked presentation or blocking. This approach is equivalent to massed presentation whereby the content is consumed successively:

The illustration above maintains the topical sequence, in contrast to random interleaved presentation whereby the sequence is shuffled:

Just as the spacing effect can be employed to produce spaced block presentation:

…so too can it be employed to produce spaced interleaved presentation (grouped):

I use the qualifier “grouped” because, while that’s the traditional way of illustrating interleaving – I suspect due to the formal paradigm of education by which you fill up the periods assigned to you – I see no reason why each leaf couldn’t be separated over time; hence spaced interleaved presentation (separated):

As you can see, it gets complicated real quick, and that’s before employing reinforcement or the testing effect!

When I look at the various permutations of spacing and interleaving, I wonder if an optimal timing or sequencing regime exists. Full disclosure: I’ve done zero research to find out; if you have, I’d love to play my lazy web card and ask you to share your findings via a comment below.

I also wonder about the efficacy of a bespoke regime that sequences the leaves according to a dynamic pattern – test latest > test previous > present new – leading to a final summative test:

I call this regime spaced dynamic interleaved retrieval (quite a mouthful!) or dynamic interleaving for short. Again, if you’re aware of anything out there that’s similar, please let me know. 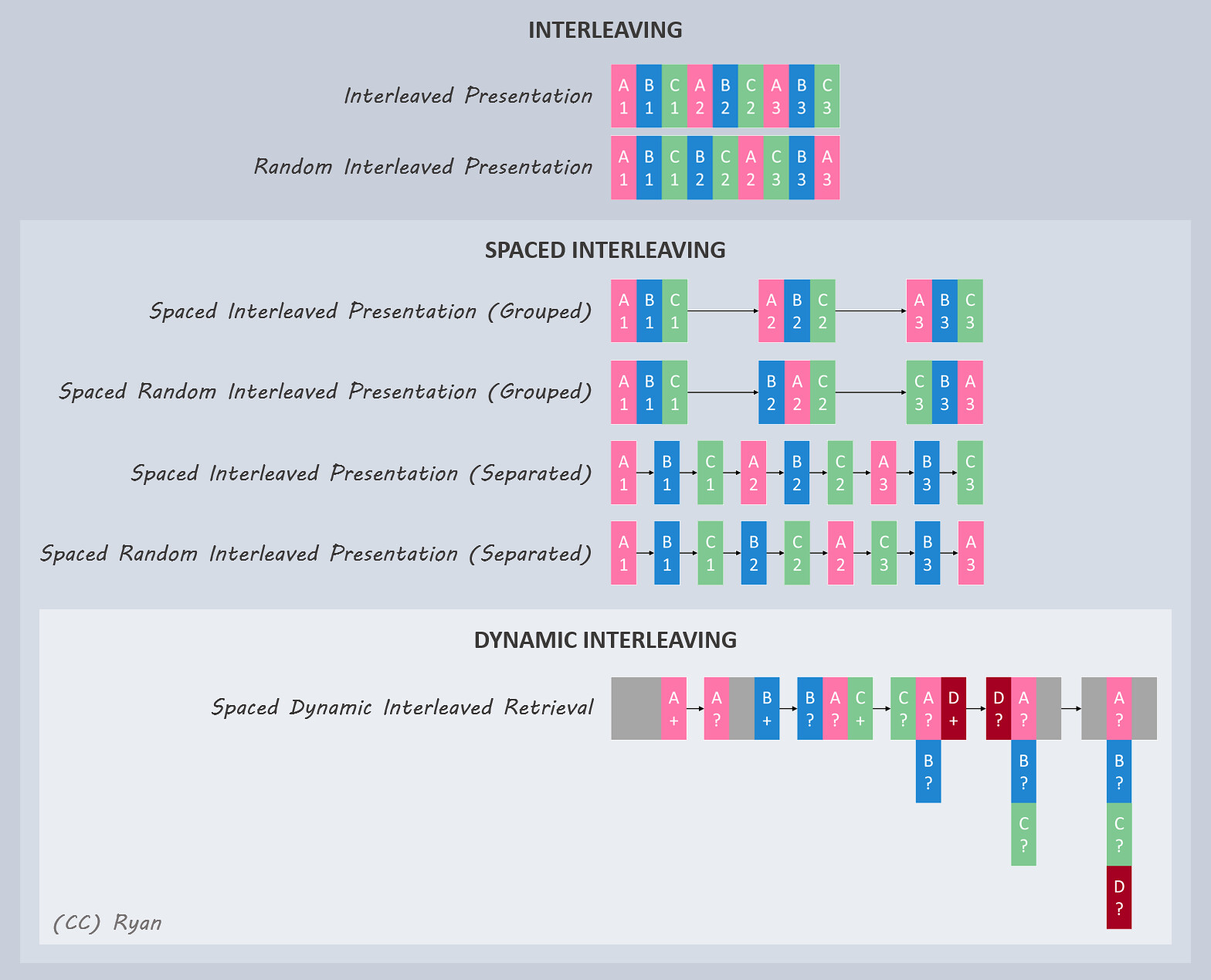 Sometimes, out of the blue, one of my blog posts really hits the mark.

Such was the case recently with Great and small in which I had a go at redefining our pedagogical terminology.

While the post only attracted a few comments – cheers Neil, Dani and Rob – my friend Helen Blunden observes that barely anyone does that any more. To her point, I was contacted via other means by readers who wanted to thank me for sharing my semantics with them.

That was very rewarding, and it has encouraged me to do it again! 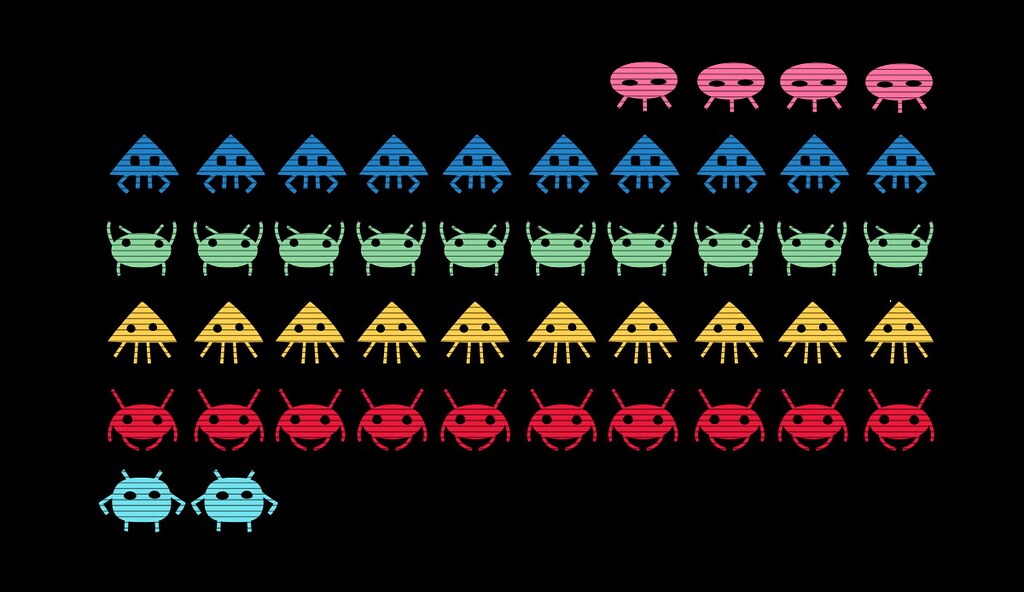 Lately I’ve been thinking about the spacing effect.

And when I say “thinking about”, I mean getting thoroughly confused. Over the years I’m sure we’ve all encountered phrases such as distributed learning, spaced repetition, retrieval practice and variations thereof; but it has become apparent to me that many of us conflate these terms.

So I’ve spent a typically disproportionate amount of time trying to untangle the meanings of these phrases, and it is these semantics I wish to share with you now.

I consider the spacing effect an umbrella term describing the improved outcomes achieved by separating learning activity over time.

The foremost example is spaced presentation or distributed learning whereby the content to be learned is chunked and consumed periodically:

This approach contrasts with massed presentation whereby the content is consumed all in one hit, as per a crammer the night before an exam:

Science says while the crammer might do well on exam day, they’d retain more in the longer term if they were to split their study across the semester. And this makes sense to me, as the cognitive load is reduced in each session, and I presume the time intervals accommodate further cognitive processing that embeds the concepts deeper in memory.

Note that my example of the spacing effect above didn’t involve the repetition of content; but it may well have.

Spaced presentation of the same chunks is known as spaced practice or spaced rehearsal or spaced repetition or distributed practice:

This approach contrasts with massed practice or massed rehearsal whereby the content is repeated in one hit, again as per a crammer the night before an exam:

When the duration of the time intervals between repetitions increases, it is known as expanding practice or expanding rehearsal:

If the repeated content is presented in the form of active recall, the approach is known as spaced retrieval practice or simply spaced retrieval and it’s covered by the sub-umbrella term the testing effect:

This approach contrasts with massed retrieval practice whereby the content is repeatedly recalled in one hit, as per rote learning:

When the duration of the time intervals between active recalls increases, it is known as expanding retrieval practice:

While the recall device might be a quiz, it might also be a case, debate, game, simulation, on-the-job assignment… whatever demands the retrieval of the concepts from memory.

It’s worth noting the rather unhelpfully labelled spaced learning is a specific approach to spaced retrieval whereby the first presentation is followed by a 10-minute interval during which the learner undertakes a distractor activity (e.g. shooting hoops), then an active recall session such as a quiz, then another 10-minute distractor activity, then the final session in which the learner applies the knowledge in the form of a task.

In today’s hybrid and hyperbusy working environment, I feel the timing has never been better to leverage the spacing effect in our instructional design.

Instead of a 3-hour long class or a 45-minute long e-learning course, why not chunk the content and deliver it over time?

This approach enables our target audience to weave it into their work day… and make it stick. 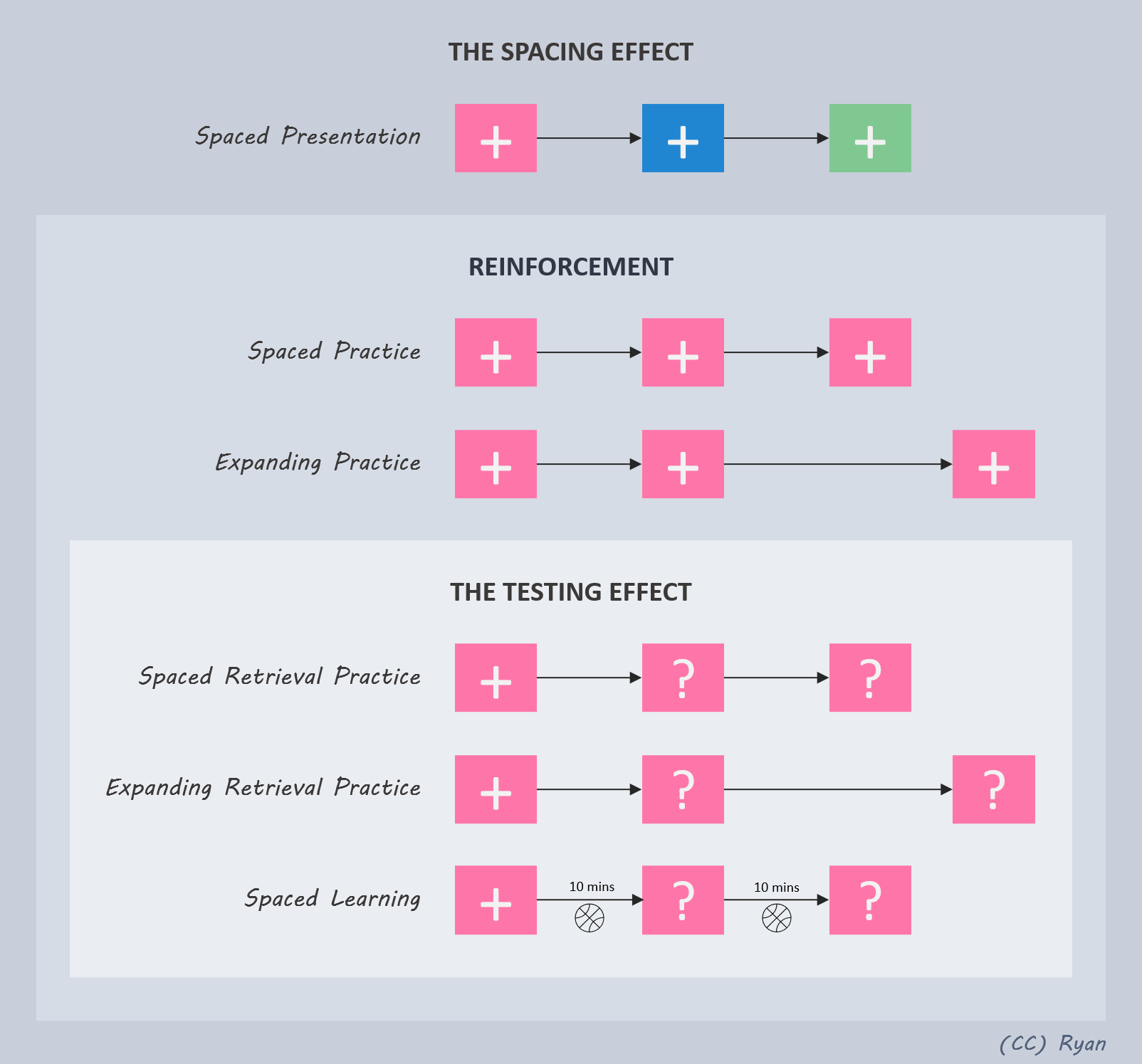 I consider comments the life blood of my own blog, and whether they be positive or negative, classy or rude, they all add to the diversity of the conversation. If your fragile ego can’t handle that, don’t blog.

Right, rather than waste my thought bubble, I’ve decided to reproduce the thrust of it here… 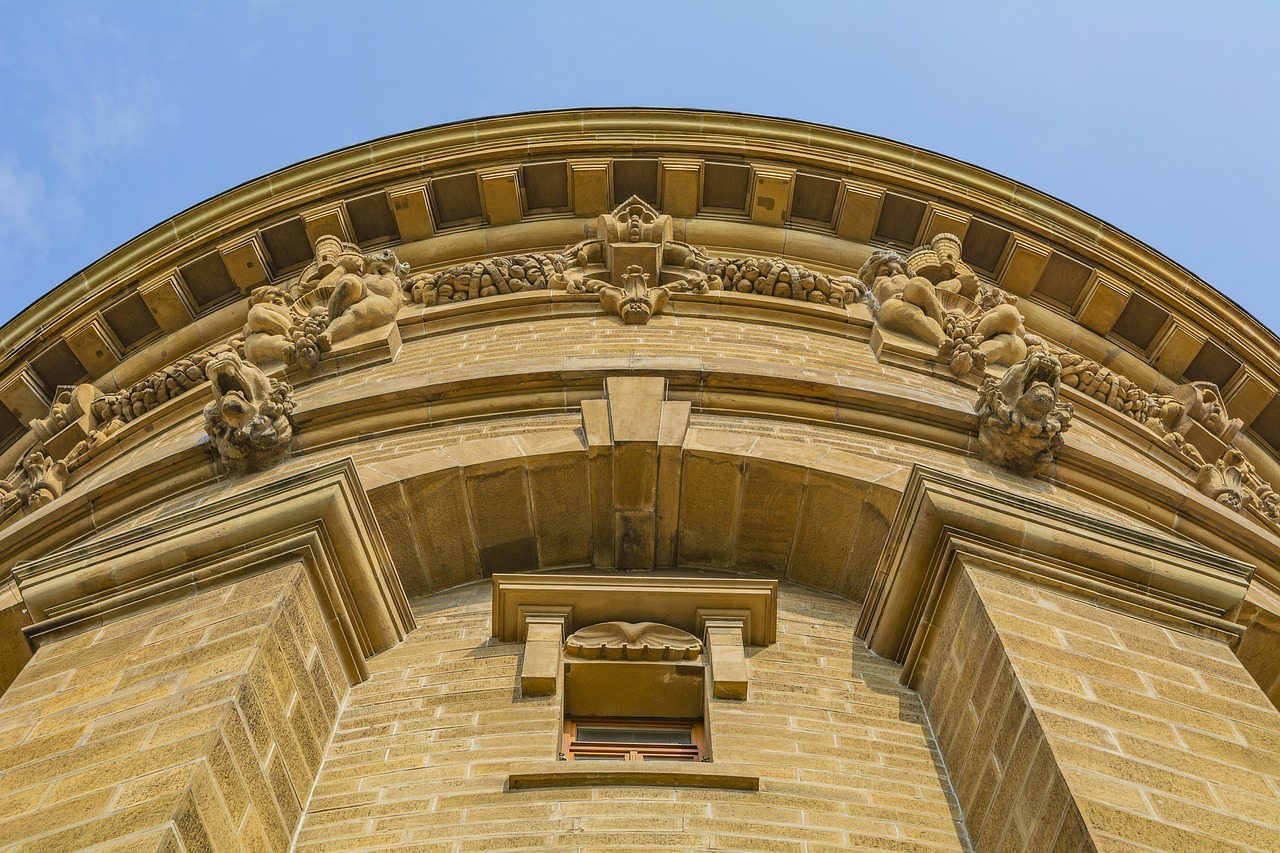 The OP was about the future of Higher Education being modular and flexible, which I agreed with. However something that caught my eye was the author’s observation about the assessment of prior learning via an essay or exam defeating the point of documentary evidence of previous course content or work experience.

Yet I feel that assessment via an essay or exam or some other means is the point. We needn’t rely so much on the bureaucracy if we could simply demonstrate what we know – regardless of how we came to know it.

When accrediting prior learning, a university needn’t get bogged down with evaluating myriad external permutations that may be worthy of credit, because what matters is the outcome of those permutations.

Similarly from the student’s point of view, it wouldn’t matter if they’ve done a mooc but not paid for the certificate, or if they did a course many years ago and worked in the field thereafter. What matters is the knowledge they can demonstrate now.

As a bastion of education, the university is losing ground to external competitors. Yet it maintains a certain gravitas that I suggest can be channelled into more of an assessment-driven role for society, whereby it validates knowledge at a certain standard and awards its qualifications accordingly.

It’s role in teaching and learning is retained, of course, to fill in the gaps; powered by research to keep it at the forefront of the science.