Have you ever been to a conference where the presenter asks the audience, “Who’s implemented a mobile learning strategy?”, and only 2 or 3 people raise their hand?

Forgive me: it’s a rhetorical question. I know you have. Because everyone has.

Of course the question might not revolve around mobile learning, but rather gamification, or enterprise social networking, or flipped classrooms, or whatever the hot topic may be.

While a lot of talk is bandied around about e-learning, it’s evident that relatively few of us are actually doing it. 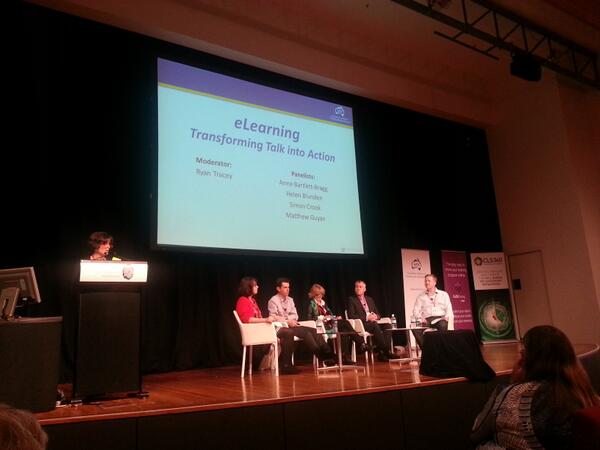 To help bridge the gap, I was honoured to moderate a panel session at last month’s AITD National Conference. I was even more honoured to share the stage with Helen Blunden, Matthew Guyan, Anne Bartlett-Bragg and Simon Crook.

The session was entitled E-Learning: Transforming Talk into Action, and the panellists were hand-picked from multiple sectors to share their insights and expertise with us. And that they did.

Simon explained how his science students are using their iPads in class to enrich their learning experience: “Engage me or enrage me”; Matt described his use of Articulate Storyline to develop online courses in-house; Helen shared her experience in using Yammer to cultivate a collaborative culture in a conservative corporate environment; while Anne dove head-first into MOOCs and ruffled a few feathers along the way.

Regardless of the specific technology or pedagogy discussed by the panellists, the overarching advice provided by each one was to give it a go and see what happens.

In other words, e-learning is innovation.

Now I realise that many of my peers will balk at this assertion. After all, e-learning is decades old, and today’s L&D pro’s are tech savvy and digitally invested.

So let’s take the “e” out of “e-learning” already – I’ve argued that myself in the past. However I put it to you that a great many among us still haven’t put the “e” into e-learning, let alone take it out again.

For these people, e-learning represents making changes in something established, especially by introducing new methods, ideas, or products. And when you think about it, e-learning is that for the rest of us too – it’s just we’re more comfortable with it; or, in fact, excited by it.

For all of us then, viewing e-learning through the lens of innovation offers us a crucial advantage: it reframes failure.

You see, innovators don’t think of failure as most people do. Rather than see it as something to be ashamed of, avoided at all costs, and certainly not to be aired in public, innovators embrace failure, they actively seek it out – and most importantly of all, they learn from it.

They appreciate the fact that if you never try, you never know. A failure isn’t an error or a mistake, but a beautiful piece of intelligence that informs your next move.

The trick of course is to ensure that when you fail, you do so quickly and cheaply. You don’t want to bring the roof crashing down upon you, so protect yourself by taking baby steps. Pilot your innovation and if it doesn’t quite work, modify it and try again; if it tanks miserably, cut your losses and abandon it; but if it does work, scale it up, keep an eye on it, continue to modify it where necessary, and enjoy your “overnight success”.

And still I wish to take this line of thinking further. Beyond innovation, e-learning is science.

My definition of science is “systematic knowledge”. If you want to obtain deep, scientific insight, get systematic.

Scientists frame failure in much the same way as innovators do. Again, rather than seeing it as something to be ashamed of, they see it simply as a result. It’s not good or bad, right or wrong. It just is.

The advantage of viewing e-learning through the lens of science is embedded in its methodology. Classic experimental design is based on two hypotheses: the null hypothesis, in which the treatment has no effect; and the alternative hypothesis, in which the treatment has an effect. By running an experiment, the scientist will either accept or reject the null hypothesis.

The parallel with e-learning is readily apparent. Consider the teacher who allows her students to bring their mobile devices into class; or the trainer who delivers part of her program online; or the manager who sets up a team site on SharePoint; or the L&D consultant who supports a group of employees through a MOOC. In each case, the null hypothesis is that her new method, idea or product has no effect – on what? that depends on the context – while the alternative is that is has. Either way, the result informs her next move.

So my advice to anyone who has never raised their hand at a conference is that you don’t need to don a white coat and safety goggles to transform talk into action. Rather, change your mindset and take a baby step forward.

As another year dawns, another round of professional development opportunities beckon down under… Bonza!

If you are the organiser of one of these events, don’t forget to boil the backchannel…!