One of the greatest hoaxes to be perpetrated last century was that of the Cottingley Fairies.

In 1917, 9-year-old Frances Griffiths and her 16-year-old cousin, Elsie Wright, borrowed Elsie’s father’s camera to take a photograph of the fairies they claimed lived down by the creek. Sure enough, when he developed the plate, Elsie’s father saw several fairies frolicking in front of Frances’s face. A couple of months later the girls took another photograph, this time showing Elsie playing with a gnome. While her father immediately suspected a prank, her mother wasn’t so sure and she took the photos to a local spiritualist meet-up. From there the photos, and three others taken subsequently by the girls, eventually hit the press and became a worldwide sensation.

Although the photos were quite real, the fairies of course were fake. In 1983, the cousins (by now old ladies) finally confessed they were cardboard cut-outs.

Not everyone – it must be said – had been fooled. In fact, most probably weren’t. However one who took the bait hook, line and sinker was none other than Sir Arthur Conan Doyle, whose involvement helped catapult the photographs to public attention in the first place.

It must also be said that as a devout spiritualist, Sir Arthur wanted to believe. 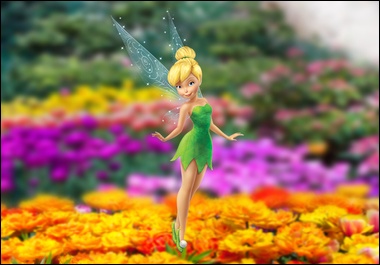 I was reminded of the Cottingley affair when I stumbled upon the Disney Fairies Trail app.

Developed in association with the Botanic Gardens Trust, the app promised to bring to life Tinker Bell and her flighty friends using our beautiful public spaces as the back drop.

Despite not being a member of the app’s target audience, I am an augmented reality advocate, so I downloaded the app and installed it on my iPad.

Its instructions were simple:

I wanted to believe, so I hotfooted my way to the Royal Botanic Garden in Sydney to give it a go. Unfortunately the experience was less than optimal. 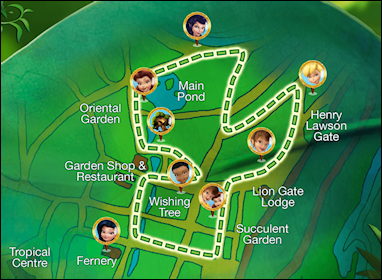 From the get-go, the map was so high level it was effectively useless.

After wandering semi-randomly around the park, I stumbled upon a tiny sign with an arrow promising that fairies live over there. Yet after crisscrossing my way all over the vicinity, my device never vibrated.

So I moved on. After a while I stumbled upon another tiny sign promising that the fairy trail continued this way, but after a short distance the path split out into multiple alternatives, none of which were sign posted.

After some more rambling, I finally stumbled upon a nice big sign declaring that fairies live here. Alas, still no vibrating – but I had a thought… perhaps the app doesn’t like my iPad? So I whipped out my Android smartphone and downloaded the app to it. It wouldn’t be as fun on the smaller screen, but I was determined to see a friggin fairy.

But it didn’t work on my smartphone either.

I should have read the customer reviews on the App Store before going to so much trouble. I clearly wasn’t the only one who had trouble with the app. And this bewilders me.

Unfortunately it was no surprise in retrospect when the real-life aspect of the experience didn’t work. To put my opinion into context, the Botanic Gardens Trust is the organisation that allows hordes of boot campers to bully tourists and locals alike off the park’s footpaths; and whose own staff choose the peak CBD lunch hour to drive their trucks and trailers along said paths.

But Disney! How could Disney fail to bring Tinker Bell & Co to life? The makers of masterpieces such as Toy Story and The Lion King evidently couldn’t engineer a dinky little augmented reality app that would work on my device of choice – or even on my device of second choice.

It just goes to show, if you want something done right, you have to do it yourself. So I did. 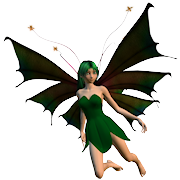 I discovered the Aurasma app a while ago, and I’ve been toying around with it to get a sense of how it works.

The app allows you to upload an image or a video, which appears or plays when you scan a real-world trigger with your device’s camera, hence augmenting reality.

I haven’t yet encountered a burning need to use it for an educational purpose at my workplace, but when I had trouble with the Fairies Trail app, I decided to see if I could replicate the intended experience.

So I downloaded Green Fairy 3 by TexelGirl, uploaded her to Aurasma, and associated her with a rose in the garden. When I scanned my iPad’s camera over the rose… Voila! She appeared. 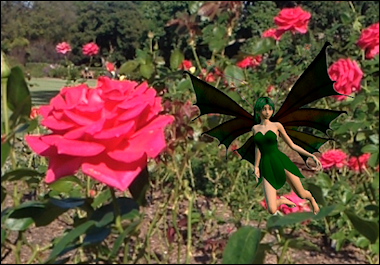 My fairy was a static image, so she wasn’t moving. While Aurasma doesn’t seem to support animated gifs, it does support video. However there appears to be a conspicuous problem. My understanding is that MP4 format does not support transparency, and while FLV does, it won’t run on the iPad. I tweeted the Aurasma folks asking them to clarify this, but they are yet to respond.

Of course, this means the experience is no longer augmented reality, but rather an illusion of it. Though I wouldn’t go so far as to call it a hoax. Fauxmented reality, perhaps?

Which won’t be a problem, if we want to believe.

2 thoughts on “A way with the fairies”